What is Choose Cthulhu?

Towards the end of the 70s, and mostly during the decade of the 80s, a literary phenomenon that would change how we understood reading took place: the game-book era.

Simple stories written in the second-person point of view, making the reader the protagonist, offered us the possibility of choosing between different paths and ways of solving problems emerging from the narrative.

Choose Cthulhu are not new adventures that are «based on Lovecraft’s work»… In our books, you’ll come to face the very stories told by that Providence’s master! Thus, we have adapted (so far) six of his best stories. Face alien deities that ruled the Earth before man, who conspire to reclaim what was once theirs; horrible monsters lurking in every corner of time; shameful cults… THE ENTIRE MAGNITUDE OF THE COSMIC HORROR!

Enjoy the cosmic horror of the Cthulhu Mythos and the nostalgia of the classic gamebooks of the 80s!

Choose Cthulhu: The Cthulhu Mythos Gamebooks is a collection of 15 gamebooks in two different formats –vintage and deluxe— and is available both in English and Spanish. Remember that the seventh book can only be purchased if you buy the entire collection. And like Necronomicon…can’t be purchased at regular stores!

And a very special surprise: a unique book, exclusive to our crowdfunding campaign backers, where you will not only take the role of the protagonist, but you’ll also get to be part of the story:

If you want to know more about our gamebooks…keep reading!

Trying to bring back the nostalgia that the classic game-books from the 80’s inspires, the vintage Choose Cthulhu collection is completely faithful to the layout design and dimensions of the first generation gamebooks style.

Some of the most significant features of this format are the font and the lack of intentionally blank pages and flaps, just as they were released back then. We have changed the white paper used in the originals for ivory-colored paper, which recreates that nostalgia better, and which allows higher ink saturation with high opacity.

This format has these technical characteristics: 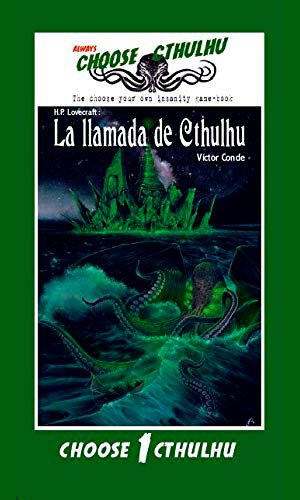 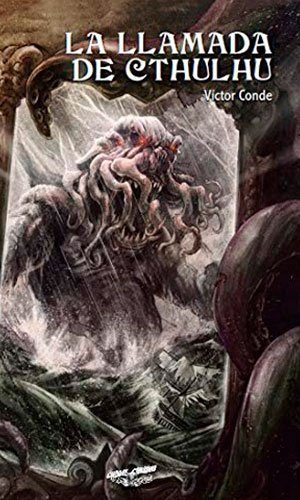 One of the main concerns of the Choose Cthulhu project was that, since the Vintage format was a reproduction of the layout design of the 80s, this would appear oddly simple compared to today’s editions, causing readers unfamiliar with these works to feel uneasy with such a simple edition.

Besides, we know that many of our cultists are keen on collecting material about the master H. P. Lovecraft –where high-quality editions are quite pricey. The Deluxe format is meant to be not only played, but also displayed. Hence, we are releasing a HARDCOVER collection.

Therefore, the Deluxe edition presents a bigger format and more complete adding a illustrated «bestiary» with the characters and creatures you can encounter during the adventure.

Our gift to the cultists

Another strength of this project is the creation of a unique book, exclusive to this crowdfunding campaign: THE ARKHAM MADHOUSE (2017), which is co-written by Víctor Conde, Giny Varlís and Edward T. Riker. This book is much bigger, with over 250+ playable pages where you’ll find multiple intertwined plots.

When playing our adventures, a recurring ending is your confinement in cell 77 at the Arkham Madhouse, a terrible psychiatric institution where inexplicable events take place. In this exclusive volume we reveal to you what happened to all those characters that ended up in the ARKHAM MADHOUSE.

If you want to know even more details about our Project continue Reading.

The visual aspect of gamebooks gained importance as more and more collections were being edited. Our visual inspiration for this project was the Fighting Fantasy collection. A serie that have incredibly well-crafted covers and inner illustrations that could drown the reader in the exciting adventures written by our authors. Choose Cthulhu has 11 full-page illustrations in each volume, and many other smaller illustrations to set the scene and endings.

In Choose Cthulhu we have striven for illustrations that closely resemble H. P. Lovecraft’s original style, following his way of writing to the letter, and trying to recreate that mysterious, sombre and alien aspect of his writing.

But Choose Cthulhu is also interactive, so we had to adapt many parts of the text to an easier and lighter reading that allows for re-readings to explore all options without it becoming tedious.

That’s why we have chosen the format of 100 playable sections that lead to either the same ending that Lovecraft thought up for his books or a number of alternative endings of our own.

Choose Cthulhu is targeted at anyone older than 13, regardless of their familiarity with the works of Providence’s master, since they are an ideal tool to get into reading and, at the same time, to rediscover the classics.

Choose Cthulhu is targeted at anyone older than 13, regardless of their familiarity with the works of Providence’s master, since they are an ideal tool to get into reading and, at the same time, to rediscover the classics. Lovecraft’s work, except for short passages, aren’t particularly gruesome, so there was no need for us to tone them down to be suitable for all audiences.

We want to warn you that we use many terms and expresions of the original texts, so maybe some passages could sound «weird» and «outdated». We also remove some words that could sound offensive nowdays.
Another aspect that greatly concerns readers is the difficulty of the gamebooks and whether there are puzzles or special abilities.

The answer is YES and NO. We have chosen the classic gamebook format, where there is no dice rolling, nor characters with special abilities; but we have included some simple mechanics in certain volumes in order to make them more entertaining. Some of these are: puzzles you can only resolve by investigating different sections.